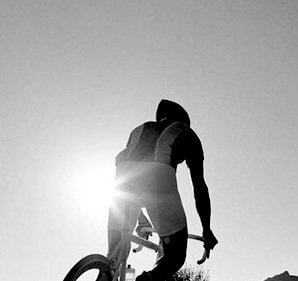 Posted at 15:03h in Uncategorized by galibier 0 Comments

Two hairpins on I try to change up a gear but the lever movement is met with a dead stop and no click, I look down and the chain rides forlornly next to the spokes. My knees shake at the top of each rev like a nervous hangman’s hand. I pass the 12% road sign. Still passing it. Still passing it. I forsake ice cream and chocolate for the rest of my life.

How slow I was moving was a surprise to the sheep who momentarily stopped chewing and just glared as I inched past. The gradient meant desperately punched pedalling, drawing harsh vertical lines instead of light circles with my cranks.

It’s not that the climb was particularly steep, but the few big efforts yesterday still echo in my legs. Perhaps a few hours behind the lawn mover would have been better served, but the blue-lit sky tempted me out to the hills. Except this was closer to a fat stroll, than cycling.

Slower. I started to notice individual stones in the road as my pace faded more. The grey usual blur of the surface, became blacks and weeds and tar. The green haze of the roadside became plants and grass and sweet wrappers.  My breathing became Darth Vader.  The in and out bellowed in time to my slowing cadence.   Perhaps a left turn, the long, flat way home would have been a better call but on, not defeated. Sweat dripped off my nose in regular chimes to my broken vision. A slow motion glance up noted only three hairpins left and the agony would cease. The misery not only for my lungs but my soul with memories of dancing up this mountain in the years when training diaries only mentioned speed and joy, never injury and excuses.

On. Out of the saddle and back down. Each as brutal as the other. Back up with the gloveless hands slipping limp over the hoods, too tired to grip.   Grind on, up. The sun now lost in low cloud. Sweat beads on the hair on my arm and I’m moving so slow that time exists to wonder at each ball of water, heavy and beautiful. I steer across the road, zigzagging to easy the torture. My bars frozen against the sluggish revolution of my new shoes. It takes a certain type of rider to get away with white shoes. Three revolutions, 10 seconds and 6 meters later I resolve, I’m not one of them.

On the last hairpin I am broken. Everything including my helmet are in pain. The pedalling style resembles a two year old fighting to open a packet of crisps. I consider clicking out, as my breathing is suffocating and irregular. The only thing that breaks the hypnotic turning of my front hub is the internal pressure building inside my thighs; they echo weak and inert My chain strains and I remember all it’s snapped predecessors.

A butterfly takes wing alongside my front wheel.   Small and white, with a green shadow around its wing tips, it flew out of the heather down and up like on a string and straight at my front wheel.  I held my breath as it disappeared under my tyre. Normally my front wheels races round like the blades in a blender. Time slowed…….

Then its wings dawn out the other side, and happily off into the mist. So slow that none of my 20 front spokes put it’s delicate life in danger.

Sweat had turned the 5mm allen key bolt of the stem into a puddle of hurt. Shoulders  tipped the bars with each revolution as I used my weight to turn the pedals. Nearing the summit, the road flattened and I click down two sprockets thinking it won, but my legs could not match the extra torque and without warning I rode off the road. I fell in the rough grass and lay there like a new born deer.

For a few minutes I felt warm, just out of the mountain breeze. The grass sent damp ooze into my side. Forty times I have climbed this mountain but never had it won, like today. I lay knocked out and floored by fatigue and dreams of youth.

It was beautiful. Nice to be lying there in grass and views.  We spend so much time earning meters above sea level to be paid back in the glory of descents that we should take time to inhale the altitude won. Races should have a 2-minute imposed foot down for this extra glory in the sky. Sportifs should have a coffee van chained to each KOM.   Fitness is desirable but not essential to climb up to the top of our world, no matter how fast we get up there, with whatever lack of style, mountaintops are heavenly.  Ironic that we must go through hell to reach paradise.