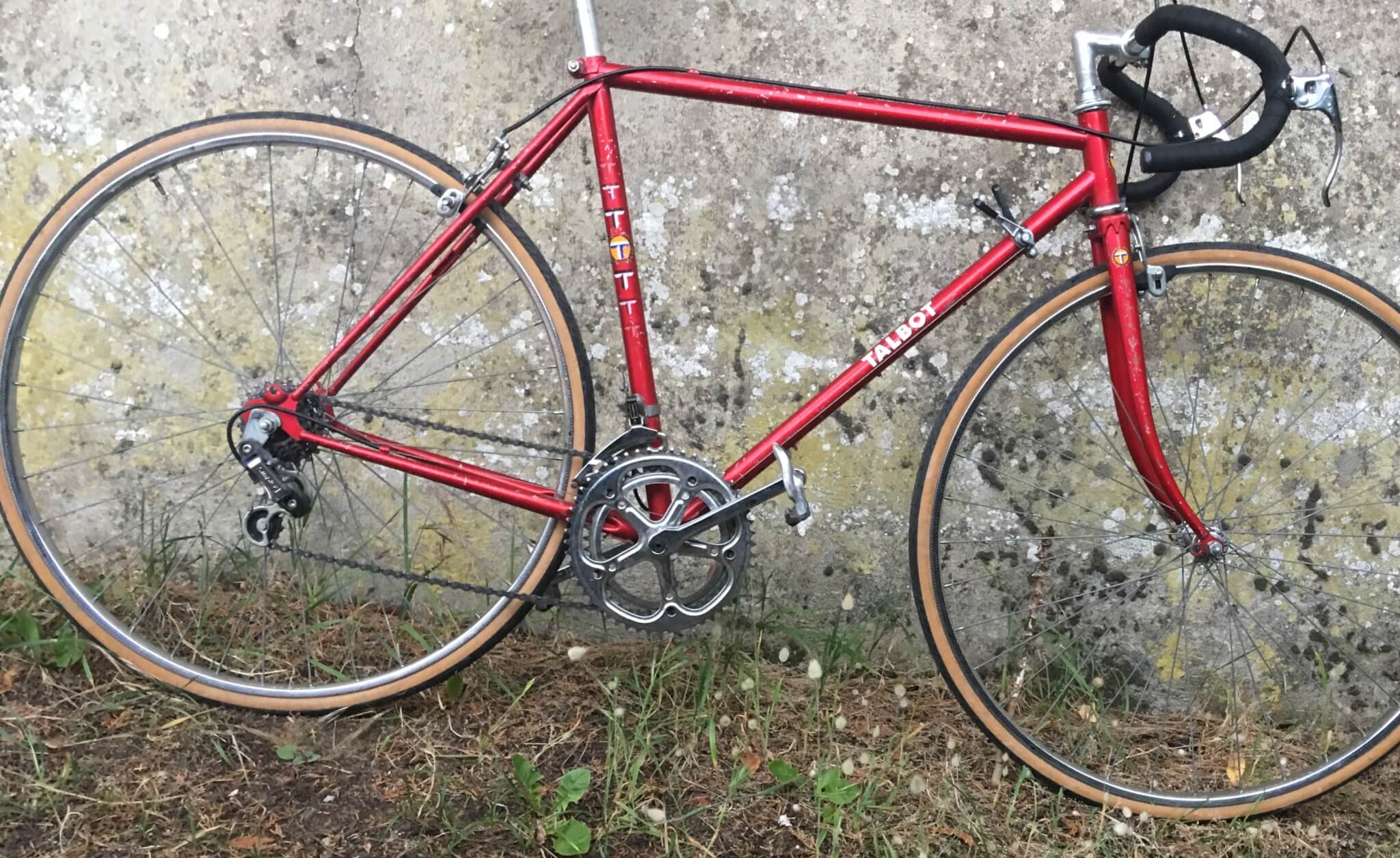 05 Jun Simple is where we began

Posted at 19:34h in Uncategorized by galibier 2 Comments

Preface:
If my bike has 57 centre to centre top tube with 73/72.5 angles, I use a 120mm stem. As the current head tube was taller, I swapped for a Deda 120- ’cause they are actually 126mm and I’m dialed back in.
I feel comfortable with experience acquired sizing. My 175 cranks spin happy, I can visualise the extra fulcrum length being turned into speed. My saddle tip is offset 75mm behind that BB, and 81.5cm vertically above it. Not 81.4.

Day three on holiday and I was still OK to leave my bike at home. Family time. Especially as the meeting at our production factory took up all of Day One.
If anyone had Googled it they would have seen our coastal fishing village didn’t have a bike shop. If anyone had done a more thorough search, anyone, would have found out that the nearest bike hire was 80kms away. Anyone would be fine. Fine.

I think it was the wistful glaring at passing cyclists on family walks that gave my thoughts away. Initially critiquing their saddle height and clothing choice for the darkening sky. Fine.

Day two, It was toy shop window envy. By yesterday, their vision stopped me, mid-conversation as I fell into cycling fantasy mode.
Family time- I said back to her when she offered to drive me to the bike hire.

We stumble upon the flea market after a roadside lunch. Fist size tomatoes were bought from the girl who grew them and sliced in a still warm baguette. The custard tart desert was only amazing, so we would shop else where tomorrow.
The flea market had lines of people selling shite. But the sun was out, some were drinking local wines and chatting, most were pleasantly smiling-so the broken toys and scratched DVD and mismatched cups were attractive…shite. A guy in his 60s cycled by skilfully dodging the lines of customers looking at a framed picture of a ship that a child had drawn on with crayons.  I was staring now at anything on two wheels. The temptation of new roads was my crutch for long gone, fast roads.
As we passed another stall selling a punctured fire extinguisher and last months washing up liquid- a paunch man of 75 stood in front of a line of kid bikes in ascending size. My gaze hurried to the big end and there stood a 25 inch mtb, with bent front forks that had been turned the other way. Beside it, looking daringly commute, was a 40 year old, but alive ‘Talbot’ racing bike. I stared at it long enough not to completely dismiss it and she had already asked the price. The unspoken rhetoric being if I was happy- all would be happy. 50 euros was asked and 50 was paid.
4 minutes later: I also paid 50 cents for an old adjustable spanner from a bucket of horse related metal.
6 minutes later: I had wheels unscrewed and was bending the mudguards to fit into the car boot.
10 minutes later: I was back with the family to Continue our holiday.
10 mins and 30 seconds later: I was wondering how I could swap the pedals and get out for an hour after kids were lost to sleep. 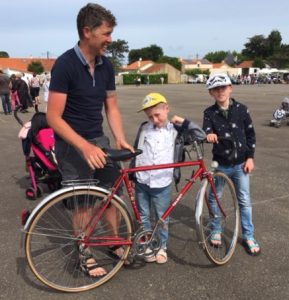 After dropping out of university, I had worked at Hickland cycles to raise money to go racing in America. The busy bike shop had not one specialist tool; so we learnt to tighten a nut with a hammer and loosen a hub cone with two hammers. These long forgotten skills returned when I raised the handle bar stem by prayer and force. The dynamo came off ok with the mudguards and carrier rack and bell. The pedals wouldn’t budge. 20 mins of heaving and shouting later, I could feel my dream slipping away. The shed of our holiday house had but two tools- an old hack saw and a spade. Soon there was a 15mm slot cut out of the blade of the spade and 2 pedals lay at my feet, beaten.
The plastic saddle was the shape and size of a starling’s wing. The seatpost was removed with the hope of it being 30cm long. It was 10. That wouldn’t permit my required saddle height or any humans that grew up on a balanced diet. So I resolved to ride out of the saddle.  Just ride.

The brake levers are a thing of beauty. If you love shiny, steel knives hammered by a drunk blacksmith. They didn’t work, but the front brake did make a distracting whirring noise. The more pressure you applied to the lever the bigger the noise, until is sounded like a pre explosion washing machine. Regardless of the noise, nothing actually happened to your speed. The gear levers work fine if you don’t touch them.

The fantastic, plastic, rear gear used gravity to hold the chain under the last sprocket, its springs and cable system long ago emigrated to a freer society.

After as-nice-a-pasta-dinner I could make with expensive cheese and cheap wine, in the silence that spoke: we are all gonna die one day and we shouldn’t waste a moment- she said – just go.
90 minutes left of sunlight, I raced away along the coast, all the time learning to stop pedalling 50 metres before a junction and that my growing smile was like water inside a fire engine.   Lost in lanes on the way home, all the unworkingness and rattles and worrying cracks were silenced.
I had got lost in seeking perfection in a bicycle and forgot the joy in the simplicity of what it does.
The worst bike ever had transported me to new roads and visions which were never tonne witnessed  without it. You turn the pedals and start up a magic machine that promises nothing and delivers freedom and wonder .

We have become polluted with details. 2 wheels that turn on tyres that have air in them is the base starting point and enough.

Arguing on an Internet forum, with a man in his underpants from South Korea over the benefits of tubs over clinchers- is wasted riding time. The lightness of a bike is directional proportional to its longevity. That red Talbot bike is over 40 years old. No high modulus carbon Pinnerallo will be alive to save a smile in a flea market in 40 years time.
Yes, they are lovely but how much soul have they?
I won’t be bringing the bike home, but for the next few days a rusted red, too-small Talbot bicycle will be my partner in freedom. All brakes should make a whirring noise.

At the end of the week the Talbot was left in the main village lane in hope someone else would find joy and its story could continue. 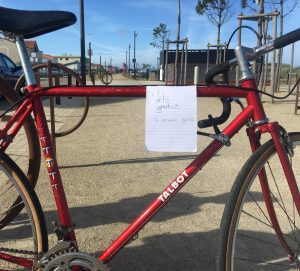