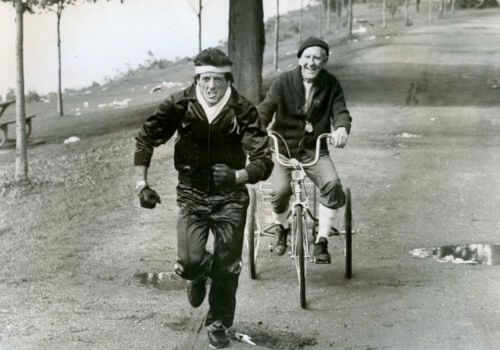 Posted at 23:18h in Uncategorized by galibier 0 Comments

Keen and excited for the shadow of the season ahead? Nervous about your impending form? Worry not; I have the solution, the Philadelphia Solution. Simply follow these three steps and I will guarantee you a better season than last. Than ever imagined. No magic or potions, just a trio of easy steps and progress for any competitive cyclist will result. Measurable improvements. 3, simple, progressions.

Commit to it and the advancements over previous years, are nothing short of remarkable. Unfortunately these three wonder steps will not rewrite your genetic code, developing Tom Boonen’s lungs even if you employ Tyler Hamilton’s chemist. It won’t even make you win, if you haven’t been close before, but it will tender positive development.  So take a deep breath, hold it and run over the three mystical steps:

With our seasonal climate of 4 months winter, 3 months spring and 5 months disappointment, most of us possess a turbo trainer. The triangular torture machine that sits folded and unwanted in damp in garages or cursed under a bed We all own one; it wasn’t hard to buy the thing, another excuse into the bike shop. The sad fact remains that it is just hard to motivate noise from it.  They are a great training apparatus; In fact I would go so far to say the best. £100 spent on a turbo will return, pound for pound, results and value that no Kevlar pedal could ever offer. A carbon seat post could feasibly reduce your 50-mile time trial count by a few seconds; the turbo trainer however can offer minutes advantage.

This effect is a simple result of training in a controlled, regulated environment. The weather in the shed is always Majorca, the road surface same, excuses are banished. It has been noted that an hour spent on a turbo may be worth two on the road: this is may be true if calorie counts and watts per hour are examined.  The amount of time we spend freewheeling or descending on a spin is extraordinary!  Attach a pair of SRM power cranks to your steed and watch the power-reading buck between nothing and 700w at corner exits, and any nothing, is time wasted. Turbo sessions demand constant exertion.  Desired effort can be obtained and pedalling style perfected. An effort of self determined duration and intensity that can increase with adaptation.

From a ten second sprint to a 40-minute climb, an indoor trainer is the reinvention of the fixed wheel, without the drawbacks. There is little argument against them. Spend a few more quid and Tacx, Elite, Lemond all offer a reasonably accurate power monitor, and having an actual note of your daily watt output, the essence of training. Watch the evidence of your body acclimatization to effort, as your third 200-watt session requires an effort less demanding, proven by the pulse monitor display. Controlled, reliable and ready. Your turbo is also the only place where I think Level three and four intervals can be done effectively and in safety. No traffic, no variants…a class piece of kit.  So why don’t we use them?

Dull, dull, and dull. Dull as a wet sick. A session begins spinning, full of hopes and dreams. A glance at the watch you notice just 4 minutes have gone by. Then 5, five and a half, 6 minutes and 14 seconds. Somewhere a hole has opened in the space-time continuum. Cungured by the whirling legs, a hole to a parallel universe where time lingers- a lot. Your freshly salted eye, sees the second hand on loiter as the lactic acid burns, and already you’re unhappy.  How do you get the mind round? …. By distracting it.  Lull the brain away from the monotonous pain and on to something else.

Film (…and the three steps).

Place one working Turbo, in a ventilated room, within clear view of an old TV. The DVD player should be then hooked up two feet in front of your winter bikes bars, just out of the sweat zone. You’re ready. Ready for a new training life.  Pacifed into form by quality film. Initially in December detached the brain from the pain at hand, with several level 1(120ishHR) sessions: Sit-coms suit great. After a few weeks when the legs are turning freely, progress in early January to solid base work. An old Tour de France stage viewed will fire up the imaginings of April form and loan breakaways. Put the heart-monitors upper alarm to 60% of max and match the leg speed of the pros.

10 sessions and the body gets to love it. The new cocktail of 100 revs per minute and a western. In this measurable situation, increases in performance can be made succinctly. Steady, monitored improvements. Training sessions become linked to DVD download. January sees action series and short comedies all around 70 minutes; Early February is for Big Ring blockbusters: 90 minutes , with intervals thrown in during a chase scene and a 15 second sprint for every shot fired.

Only then, with the sign on sheet looming will the ‘three steps’ bring you to your finest form. Base done, race form approaching. Bring on Balboa.  Sylvester Stallone’s first four Rocky movies are the finest turbo fodder ever produced. The films have it all. Made for turbo training. The initial slow build, the first thirty minutes spinning happy at 110 revs per minute. Becoming engrossed in the feeling a small guy can conquer the world. You are Rocky, I’m Rocky and so’s my wife. Ignoring the noise the 53 by 18 is making behind, the first fight sequences, no one needs to tell you to up the tempo, an involuntary ten minutes is spent just under threshold as Rocky gets his shite knocked in by the champ.

Step 1, “You’re natan but a washed up punk” old coach Mickey’s words stimulate a passion within.

Defeated, we recover at upper level two for what follows in the glorious steps, especially in Rocky 4. The Italian stallion takes on Ivan Dreago and the KGB. The subsequent training montage is where you acquire the improvements on last season results. 1 hour into the movie you are totally, involuntarily, right there with Rocky. Once the trumpets start; no Wiggo time trail, no Quickstep last kilometre will offer surge training fervour like the intro “din-in eaaa… din-in eaaa” that accompanies Balboa on his final training run in Philly before the big fight. Rocky ain’t takin’ the shit. 115 revs.  He pounds beef, 120 revs, runs up mountains and outruns Ladas. 125 revs.

Step 2: “I vill break you”  If Rocky can beat the entire Polit Bureau then I can do a 21-minute 10).  You’re there with him, spinning 125 revs a minute. This log lifting and one arm press ups, 75 % of your heart rate banished as you match him on the speedball. It is fantastic, cinematic muck. But the seasonal advantage is there.

The three quotes from the movies inspire dreams of glory and victory and get off your ass and try harder. The hypnotic Hollywood offering gives you 97 minutes assistance to the goal. Three 10 minute upper level three intervals, and a sense of possibility. All in one session. 1500 calories burnt and ten places ascended.

Step 3“He iz like a peece af steall” :The thoughts of your training partners on where this youthful ambition and new found power have come from. Mid April your compound indoor training, has gently advanced you to the cycling god you see in the mirror). After ten viewings of Rocky, punching the air in round 12 as you spin 350 watts… you’re a contender: “Aid..rie..nne”