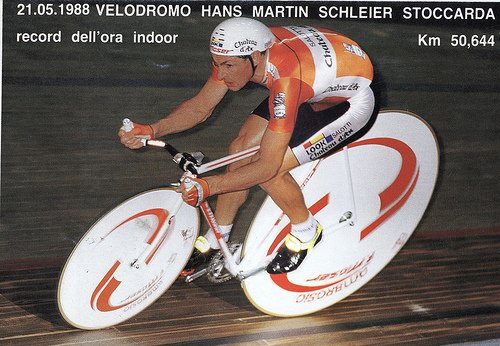 Posted at 09:20h in Uncategorized by galibier 0 Comments

I had a poster on my wall when I was a new teenager of Fransceso Moser, in flight, on his amazing hour record bike with the massive back wheel. The velocity of the planet-like wheel, chainsawed the seat tube in two. I used to drift off to sleep, not dreaming of being a rock star or a security guard at the Playboy mansion- but that beautiful Italian, spinning to glory on the boards.

Over the past few years I have tried to rewrite my childhood fantasy when the discovery was made that Moser’s dogey back room preparation. The tag team of Conconi/Ferrari gave him the most of a litre of his own blood for breakfast, on that afternoon in Mexico city.

I have since went to the default Eddy Merckx for hero worship. This is common place in cycling in the search of heroes. I now replace ‘the Cannibal’ in my head, like everyone else to be my rock star of youth. We have also reverted to the default ‘retro’ as cool and stylish.

A recent convert to cycling, commented this morning at the coffee stop how unusual, in a sport where technology is key to advancement and speed, why recent stars were not adored and embellished. Scone fed theories to why we embracing everything from the 1960s and 1970s in cyclesport- the glory years, resulted in the same reason the Moser poster was lost. The glory of false victories has left a bitter pill on even the most ardent roadside supporter.

I even have unknowingly rewritten my holidays. When asked today when is the first time you climbed Galibier, I respoke about 2006 and a 25 sprocket straining on an old Dawes with tent swinging at each pedal turn. I have yet to mention that that holiday was following Le Tour and my throat was soar cheering for Rasmussen. That wee skinny muppet was higher than the summits 2,645 metres. Years past and I have rewritten my yells and holiday to have better heroes and better style.

Image is important, if we want to admit it or not. So Eddy’s cat shit brown Molteni jersey looks beautiful because of the dreams and beauty in the sweat and achievements. Place a brown and orange tee shirt in a tennis store and it the collar will be bend with “Sale” tags. Stick in it a bike shop and men will kill a goat to wear it- in the hope of inheriting some of his passion and……