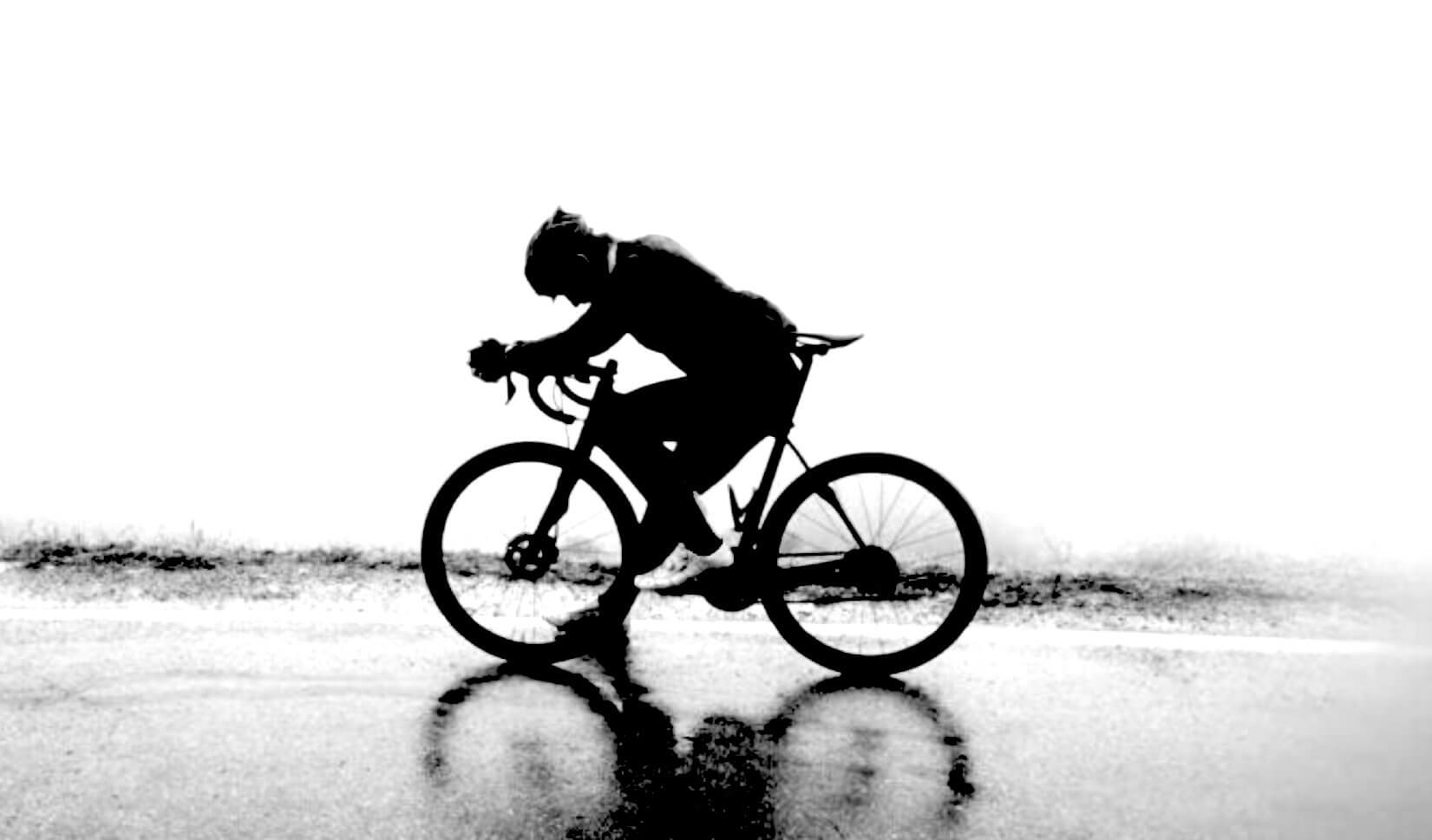 04 Dec Getting back in the saddle

Posted at 21:51h in Uncategorized by galibier 0 Comments

The two parts to a bike ride. Look thru glass to imagine route while tensing thighs, to gauge fatigue/strength – and the actual ride.

Yesterday,  I messed up on the first part. I didn’t listen to my body. It warned me as putting my socks on-standing induced a nasal hernia. I ignored the sign and kept going. I was inspired my mate who would go out in a large blizzard. Nothing stops him. He who would saddle up after a nuclear explosion; As the mushroom cloud was melting the fur of his dog, he would be pumping his tyres, with a smile. I got strength from his madness and went out. Rubbish idea.

After a period of weeks or months off the bike, the first day back is sludge.

On the descent from the house the chain ring felt like it was made from an offset triangle. I looked down and saw each one of 53 alloy teeth.  As my gaze moved away, the chainring bolts turned to butter and the chain to bubble gum. So slow. It felt like some bastard had filled my tubes with custard and dropped my saddle 10cm. I glanced to see if my impeded velocity was due to my mudguard accidentally snagging a small car with two fearful pensioners screaming as I dragged it behind me.

My soul searched for an excuse. I pedalled a bit and then freewheeled until speed evaporated. Then pedalled again to just about cruising speed…then freewheeled a lazy, empty second too long, so I had to get out of the saddle to use my immense body weight to just turn the pedals again. Post office queues moved faster than this.

After a summer of joy, riding the roads and trails with every stolen minute, life’s duties took me away from the bike for a month. Not a year, just a month.  Four weeks of staring at shoes sitting behind the front door.  Four weeks, looking at the sky and seeing a blue spot in a sea of grey and ignoring it, rather than chasing it. For a month I’ve been a bit less patient and a bit less happy, because biking is needed for my brain to solve problems, breed ideas and not be a dick.

On a slight rise of a hill that wasn’t there, I clicked the gear lever but the chain rode high next to the spokes. I pushed the lever again in the hope that a 28 tooth sprocket would appear by magic The rear mech made no sound, no movement and we both cried a little.

My cadence dropped until it stopped and I put my foot down.

I used to be good at this. I was in the middle of a country road with car coming and had to straddle/waddle me and the bike across the road to safety and the humility of a verge. My elbows fell into the lever hoods and my red face rested 5 mm above the handle bar stem. A bead of sweat ran off my nose onto the stem and we were again connected.

My bike spoke to me “nothing wrong with me pal.  You’re shite… again.”

If I had spent a life time learning the piano instead of spinning pedals, after a month away,  I would still be on stage somewhere, playing a concerto. Take a month off the saddle and I need stabilisers and a YouTube video of how fix a puncture by a man who had fixed just two.

It is the most unforgiving sport.

The first day back on a bike, after a break is the worst.The last three miles home were done at hangman slow motion.

When you ask someone for directions; then just stare at their teeth and don’t listen to the required instructions; That’s what my legs were doing. Ignoring me. I pleaded with them just to go round. It’s not the knock, or lack of fitness, I think your body just forgets the process of cycling. The saddle feels harder and the bars are suddenly the wrong shape for your hands. In the month off the bike I forgot how to do it.

But I did go and I’m glad. Because today was glorious. It was freezing, so I took my ageing mountain bike out with 24 psi and became a biker again. The icy corners were a delight instead of death. I could pedal and I could smile. Yesterday’s apprenticeship was done and the chain rings became round and spun free.  It is the first day back that is the problem.  Persuading the body to be loose and relaxed, persuading the lungs to open and not hold their contents like a captured spy in front of a desk lamp.

Today was day two and the world is balanced. So the key for getting back after a break on the bike is to avoid day one. Trick the body into avoiding the day one without actually enduring it.

Take a 15 minutes spin to the shops, to the park or to the end of the road.  With one minute hard half way to kick start the system. You don’t even need to get changed into your kit. Just mount up. After a lay off the bike the body forgets it can do the whole cycling thing. The body is stupid. It will be an awful 15 minutes sweating, kerb swiping, too big/too small gear. You look and feel like a rhino trapped in a lava lamp, but it’s only for a bit, then you’re back home.

The problem with the ‘awful day back’ is that people think this is it. Cycling is awful-  then park the bike, defeated, until the next sunny day, next summer. Fresh winter dawns are unseen and lost. Baby blue horizons, viewed from mountain tops are replaced with some Netflix series which is watched, laid out on a sofa, practicing for death.

The second day back on the bike, especially with some similarly (un)fit company is glorious.

The cocktail of hot breath passing hedges, with big sky and an oiled chain, blurred on a clean cassette- is magnificent.

I can take any awful day on the bike when day two is fantastic.