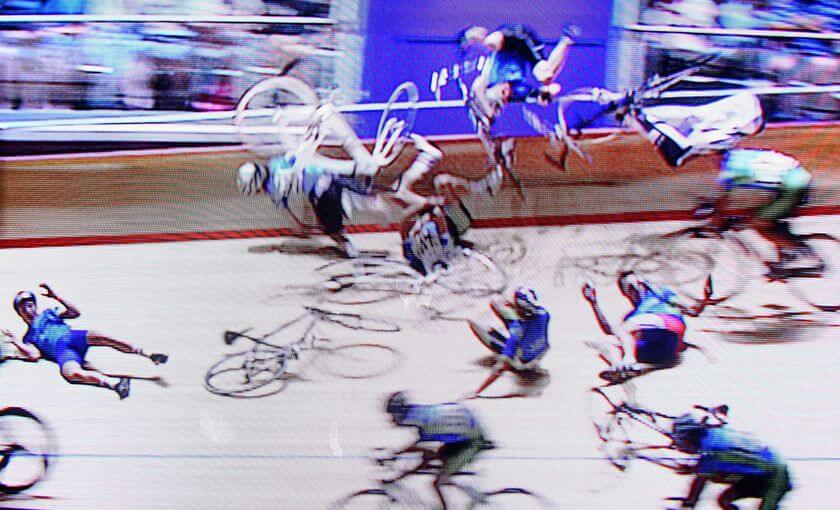 04 Dec “Close the gap” he screamed

Posted at 22:47h in Uncategorized by galibier 0 Comments

It was a different kind of scream from what racing cyclists are used to. I suppose they (screams) vary. A normal scream from a ten month old,  might suggest ‘feed me’ or ‘I don’t want that’.

But this, O this, was a different noise. A primal cry from the third level of hell. Imagine you’re in a line out of the biggest race of your life. You got over the two major climbs and there are only 5 of you left.

……and you look over your shoulder to see a charging bunch 12 seconds away. The noise your soul makes then, is about a tenth of what I heard. This scream could introduce Armageddon or a Bush third term.  This was a scream from a ten month old that stopped my heart, completely and wrenched opened my eyes in absolute and abject fear.  The noise emanated just 6 feet away, through an open door, but out of sight.

Feeding bottle preparation is not so time consuming ten months on. Gone is the operating room sanitisation of a newborn;  The baby powder scoops are no longer measured with the stealth of bomb diffusion but using the same method you put protein powder into a recovery drink, when extra tired , security has come with experience.But the scream!

Relating the incident in a phone call to my overly judgemental father, I was out of the room 4 seconds. In reality it was 29 (I timed a re-enactment, driven by fear of social services and silent guilt of wife).  It could have been 35  and (this is a big AND) there was a cushion and a plastic fire engine full of plastic, seductive bricks between him and the coffee pot.

A friend explains every life situation  as a moment in a road race, for example A relative close to death has been “dropped from the pack and is losing contact with the cavalcade”.  A bad day at work is a “final lap puncture”. This was a crash in the final corner where the 53 chainring cuts your Johnson off.

‘The’ scream made me move like Tom Boonan of the south bank of the Roubaix velodrome in 2011.  I lifted him from the soil brown, steaming puddle, which encircled his seated legs and pulled off the pyjamas as I raced down the hall to the bathroom.

We have been married years and one of the keys to a successful marriage is to nod at everything your partner says and agree. But really I just eavesdrop on about 70%, noting key words and raised pitch as an indicator for response. It took me three full years to realise that two people no matter how well matched or in love, will still disagree about 52 % of the time about general things on this earth, and a few specific ones outside it. The only real remarks I recall my wife saying to me are “I do” and “HoW much were those wheels?” Never will I forget, until the Alzheimer’s takes hold, the statement, which followed an impressive leap out of bed (a declaration she stringently denies)

What did I do to him?  What…I, I didn’t do anything. Her and her statement, with out malice, was true.  It happened on my watch.  So it was my fault. The running water was soon replaced with an ice-cold baby bath, but the soundtrack never changed throughout. The air raid scream. Missing your personal best time by one hundredth of a second. Nearly a screech but with so much more energy than a bawl. And it was true. He was in pain and it was my fault. Real suffering.   Never in my slightly self-centred existence did someone else’s pain react in my own nervous system.  The number of plastic playthings has doubled on the living room floor, admittedly out of guilt since Sunday. It is no contrition.

The echo is now leaving the walls of our small dwelling. Still every time I catch a glance at his bandaged right leg, someone turns the volume up on the dissipating din of culpability. Buried, not deep enough in my short-term memory. With my failing cycling performances, the arrival of the next generation has now redirected my ambition, hopefully my boy will still win the world race championships in 2027, even with a scar on his left leg.

Next year we will launch a shop selling the worlds first, full body, cotton wool suit for all children up to 18.